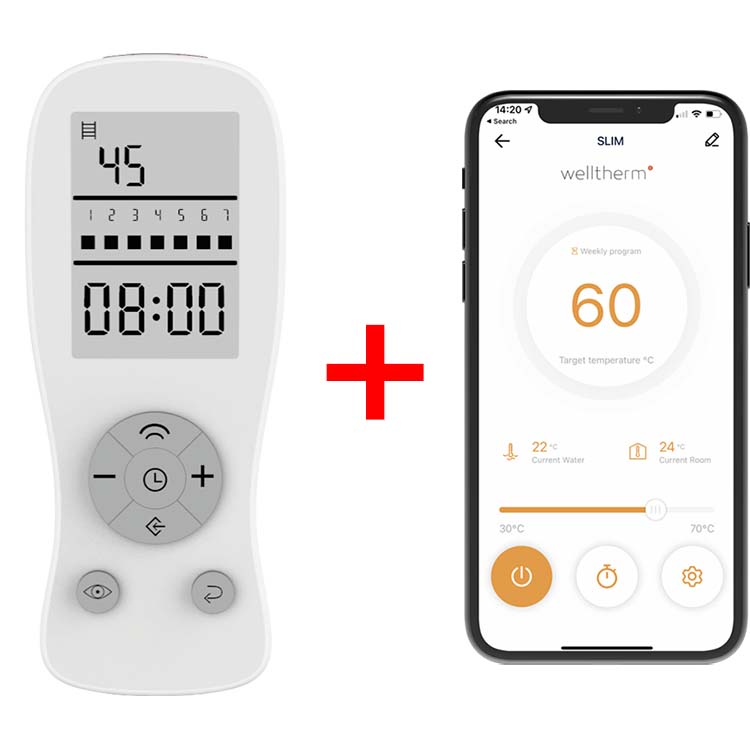 R4 towel rails can be controlled with and without WiFi. The inbuilt WiFi connectivity, which will let you control the radiator using the smart App.

However the r4 is also supplied with a remote control. With the remote, you have full control over the radiator, without having to use WiFi. 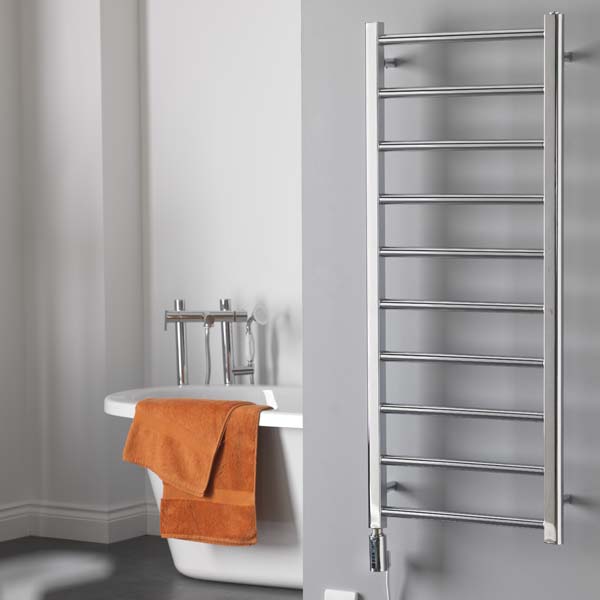 Our R4 towel rails offer market leading levels of controllability. Being one of the few eco design LOT20 compliant bathroom radiators, they’re energy efficient and cost effective to use.

With the towel rail’s WIFI connectivity, it can be controlled with the SolAire App. The app is available for Phones and Tablets and will let you access the R4’s abundance of feature’s from anywhere in the world.  A Non WiFi remote control is available separately, giving you backup in case your WiFi is offline.

The Aura Ronda is a chrome round-tube designer thermostatic electric towel rail. It is perfect for modern bathrooms, kitchens and drying rooms.  It has a modern design with evenly-spaced bars. The Aura Ronda will fit into any bathroom and is available in 3 different heights (800mm, 1200mm & 1700mm). 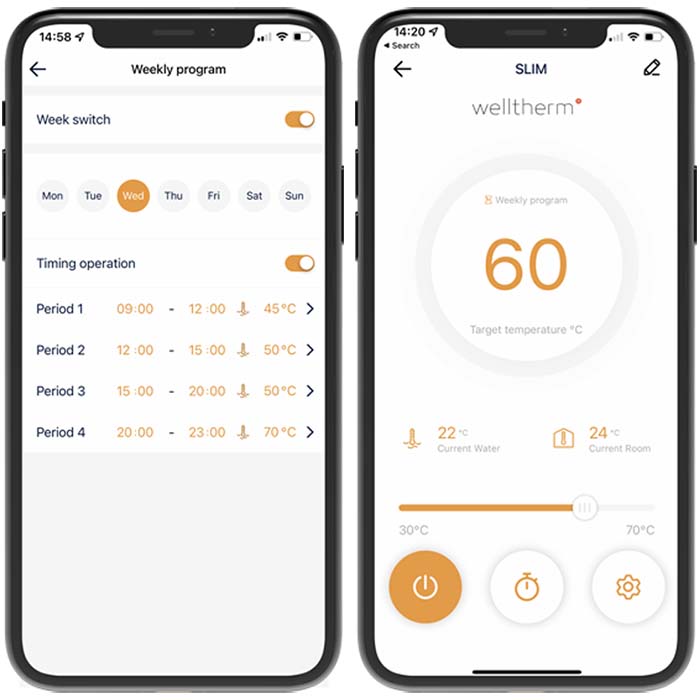 The SolAire WiFi App will let you control the radiator from anywhere in the world.

From the App, all of the radiator’s features, can be controlled with your smart phone or tablet. Making it easier than ever to control your bathroom.

This includes the timer, which will let you programme when the towel rail is on. So you don’t waste money by leaving the radiator on constantly.

With 2 thermostats the R4 can monitor either the room’s air temperature, or the radiator’s surface temperature:

The R4’s state of the art technology is integrated into a single element head. Removing the need for additional unsightly connections and receiver boxes. Everything is built into the element. 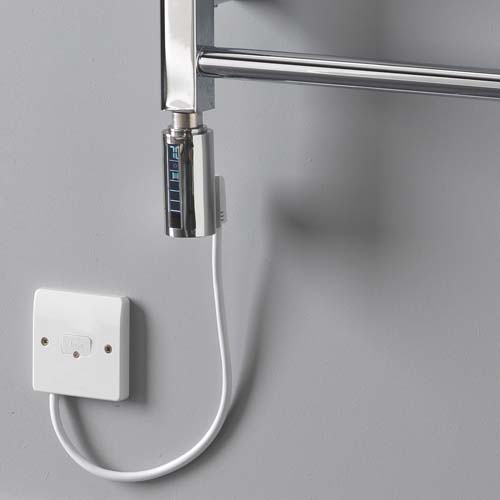 With the R4 its easy to control your bathroom towel rail or radiator.

The R4 can also be used without WiFi from control panel. With this the radiator can be switched on / off, the thermostat can be adjusted and  a 2 – 4 hour boost facility can be set.

We also have a non WIFI remote, which can be purchased separately. With this, the radiator can be completely controlled without WIFI. 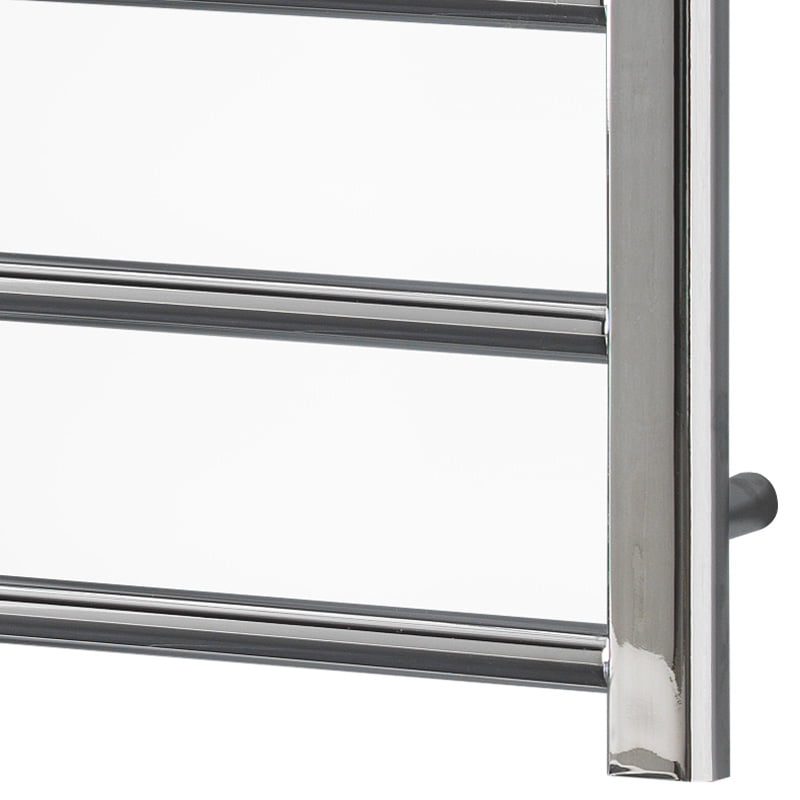 Fitted with wider crossbars, the Aura Ronda bathroom radiator has a greater surface area, which emit more heat to either warm the room or dry your towels.  It’s always important not to let style comprise practicality. We’ve designed the Aura Ronda to facilitate larger towels by carefully spacing the cross rails.

Our Aura Ronda towel offer undoubtable value for money and quality. You’ll be hard pressed to find a better standard across the British market. Our Aura Ronda range had been rigorously tested through ASTMB117 – anticorrosive salt tested to 250 hours to ensure this towel rail is built to last – we back this by putting a 10-year guarantee onto the Alpine.

We professionally convert our rails to electric at our North Yorkshire factory. Where it is filled with a radiator solution which will provide consistent heat across the radiator and prevent corrosion.

Get fast and free delivery on all our UK shipments* and discounted rates to Highlands and Islands (see *) and mainland Europe.

Join thousands of satisfied customers; we’re so sure you will find our products superior in every way, we’ve placed a 10 year Guarantee on all of this range.

Need help? Check our FAQs & User Manuals, call or email us email us.

There are no reviews yet.

Manage Cookie Consent
To provide the best experiences, we use technologies like cookies to store and/or access device information. Consenting to these technologies will allow us to process data such as browsing behaviour or unique IDs on this site. Not consenting or withdrawing consent, may adversely affect certain features and functions.
Manage options Manage services Manage vendors Read more about these purposes
View preferences
{title} {title} {title}
0
YOUR CART
Subtotal:
£0.00
CHECKOUT
BEST SELLING PRODUCTS